Gallery Heike Arndt DK proudly presents the annual exhibition “Mini Prints Berlin 2015”; a group show containing graphic works of 19 artists from all over the world. Come along on a (graphic) journey which will take you to undiscovered, urban areas; abandoned isolated places. From hectic city life in urban areas to the countryside during changing seasons – it is all here. The artists explore place-related feelings and the relationships between people in different environments and the relation between animals and humans.

The artists are not afraid to raise their voices, they touch upon taboo topics and reach for change. Inspiration is taken from current happenings as they try to depict the present. Nevertheless, “Mini Prints Berlin 2015” is a fine example of old meets new – the artists present a broad range of graphic techniques and styles, covering traditional techniques such as woodcut, lithography and etching, but also exploring modern methods enabled by the digital development. Some of the artists have looked back on older generations and illustrate the changes that the world has gone through. By doing this they are investigating human nature. Symbolic language and metaphors are used f. ex. in a large bee or a fly that covers a whole head, vigorously scratching to get into the brain. 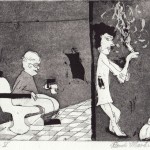 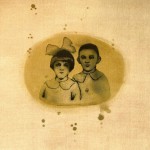 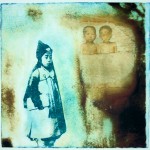 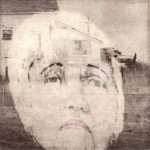 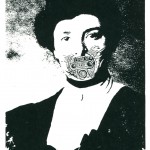 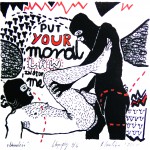 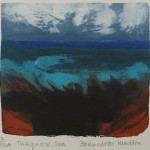 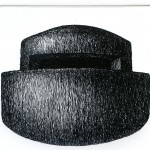 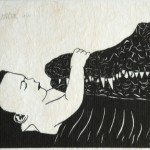 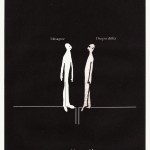 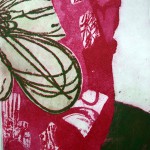 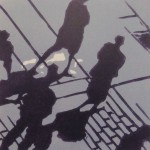 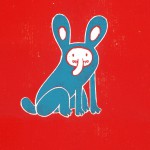 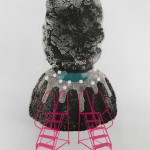 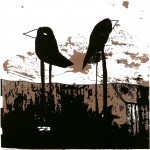 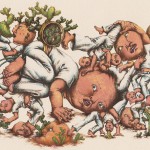 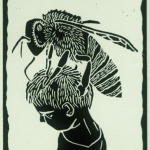 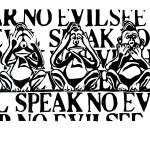 Agata Ciesielska (PL)
Agata Ciesielska is born in Bydgoszcz, Poland. She is educated at Nicolaus Copernicus University, graduating in 2014 with a degree in Graphics. During her studies Ciesielska specialized in lithography. In her art political thoughts of sex and gender are expressed. In the series “NAMELESS” the artist makes satire of the “non-existent” sex life in catholic countries. Sex is a taboo subject in Ciesielska’s home country Poland, thus she creates art touching subjects such as homosexuality, sex for pleasure, sex and reproduction.

Aine Scannell (UK)
Aine Scannell is a british artist. She graduated with a master in European Fine Arts in Barcelona and after that moved on to graduate with yet another master’s degree in Printmaking from Wimbledon College of Art, London. A long-standing concern of Scannell is the voiceless and the misuse of power, a topic which she often explores in her art.

Bernadette Madden (IE)
Bernadette Madden is born in Dublin, Ireland. She graduated from the National College of Art and Design in 1972 and has been active as an artist since graduating. Madden creates colorful  screenprints on paper dramatically illustrating the sea and the horizon. Her screenprints bring thoughts to abstract expressionist landscape paintings with their explosiveness.

Edvin Dragičević (HR)
Croatian artist Edvin Dragičević works as Associate Professor at Academy of Arts, University of Split, Croatia. He creates small etchings where he explores concepts such as safety, indestructibility and aggression. The art is symbolic, there is no place of complete isolation from others – or from ourselves. This symbolism can also be placed in the context of the current states of the world.

Eleonore Holm  (SE)
Born in Stockholm, Swedish artist Eleonore Holm is educated at College of Printmaking Arts in her hometown. The artist likes to work with themes and experiment with materials, but prefers to work with silkscreen prints. She incorporates an interest for photography by frequently using photographs in one way or another in her works. The motives might be figurative, but not very realistic. Her silkscreen prints has a sensitivity to them combined with a sometimes humoristic touch, such as a bird wearing boots.

Forschungsgruppe Kunst (DE)
Working with urban art, installation, concept- and activist art, this artist group takes the focus away from their egos by being anonymous to the public. Forschungsgruppe Kunst started in 2011 in Rostock and presents an open, temporary and interdisciplinary art collective. Their artworks seems to comment on how technology dominates the 21st century’s society, by merging old portraits with fragments of robots.

Gitte Bank  (DK)
Gitte Bank is a Danish artist who is educated at Atelier Agerbo in Copenhagen. Her artworks carry a satirical reference though some of the themes she expresses, contain a more dark existential voice. Bank seems to reflect and comment on different perspectives of the meaning of life, and human interrelations. She has created her artworks with the technique Gravure.

Hans Lankes (DE)
German artist Hans Lankes started his artistic work in 1978 and worked in a sculptor atelier in Straubing from 1980. His artworks are made by using inkprint on mulberry tree paper and rice straw paper. Lankes expresses a surrealistic dream world through his detailed and satirical motives. He has a clear mode of expression filled with fantasy references.

Katalin Kortmann Járay (HU)
Katalin Kortmann Járay is born in Budapest, Hungary. Between the years of 2006-2012 she attended Hungarian University of fine Arts and the Academy of fine arts, Munich. Visible in Kortmann Járay’s art is her interest in human nature and psychology, personal history and rituals of people. She often combines techniques and tries to use new and innovative materials.

Ksenija Tomičić (HR)
Ksenija Tomičić is born in Sarajevo of former Bosnia and Herzegovina. She studied at the Printing Department of the Academy of fine arts in Sarajevo, graduating in 1987. Currently she lives in Pula, Croatia where she is a teacher at the School of Applied Arts and Design. Tomičić works with all graphics techniques, but preferes intaglio.

Line Marsdal (NO)
Line Marsdal is born in Oslo, Norway. She works with a variety of techniques which she tries to combine; printmaking, painting and ceramics. Memories play an important role in her art as do  animals and dysfunctional creatures. Marsdal portrays the urban aspect of life, different species meeting each other.

Maja Zemunik Mužinić  (HR)
Maja Zemunik Mužinić is a Croatian artist, she is educated at the at the University of Split in art and Art Culture and has enrolled in doctoral studies at at the Arts Academy in Zagreb. Zemunik  Mužinić  combines several graphic techniques, such as etching and linocut, when she creates her art. Her art is somewhat surrealistic and bears references to conceptual art.

Patrick Fauck (DE)
The German artist Patrick Fauck graduated from Der Hochschule for Graphics and Book art in Leipzig in 2011. Fauck is fascinated by all the different techniques in the printmaking discipline,  such as wood- or linoleum-cut, lithography or silkscreen and collotype. He describes that for him printmaking is the main path, a laboratory and a great experimental ground.

Pia Möller-Light (DK)
Danish artist Pia Möller-Light is educated in painting and sculpture at Århus Den Kunstakademi. She creates art because she believes that it can lead to social and political change. Möller-Light works with graphics, photography, installations and sculpture. The city and the world are focal points in her art, the diverse human nature, interactions and relationships with others.

Randi Martin  (DK)
Randi Martin is born in the Faroe Islands and educated at the Art School of Copenhagen. Martin makes etchings on coppar. Her oftentimes satirical art illustrates the humour in seemingly ordinary situations; a woman tries to help a man take off a sock but as a result they both fly in different directions of the room.

Rie Hasegawa  (JP)
Rie Hasegawa is born in Tokyo, Japan. She has a degree in architecture from Musashino Art University, after her studies she worked as a stage painter for a stage company. In the year 2000 she moved to New York where she still resides. Hasegawa works in a variety of print media including etching, woodcut and lithograph. Her works are figurative and expressive.

Roman Klonek  (PL)
Roman Klonek is born in Kattowitz, Poland. In the 90s he studied Graphic Art in Düsseldorf, where he discovered woodcut printing. Klonek creates posters portraying whimsical creatures in awkward situations; most of them are half animal and half human. He is inspired by Eastern European styles, Pop Art and old fashioned cartoons. This is visible in his art where he balances between propaganda, folklore and Pop Art.

Ulla Aatinen  (FI)
The Finnish artist Ulla Aatinen graduated from Saimaa university of applied sciences, Imatra in 2012 with a Bachelor of art/visual art, having graphics as her main subject. She now lives in the countryside and has her own printmaking studio in Middle Finland where she mostly works with plywood and like to print many wet layers. She creates works inspired by the everyday life, meetings with people, her dreams or things that she reads, hear or see. Aatinen often uses symbols and writing in her art and implements humour and empathy when she expresses sad and depressive topics.