David Evison is an artist and former professor at the German art academy, Universität der Künste Berlin. The core of his teaching, as well as his own artistic work, is to strengthen the classical sculpting skills. Modern experimenting installations rest upon an over 2000 year old inheritance of classical comprehension of sculpture. To be able to expand and challenge the media it is, according to Evison, necessary to be familiar the history and master the classical expressions.

David Evison is interested in the boundaries of the materials and medium and let these be his inspiration. In his willful sculptures where metal is his favoured material, Evison shows static and aesthetic precision. The diffuse and twisted shapes reach out in the space and seem to move or to be alive. It can be challenging for the beholder to approach Evison’s abstract sculpture. But behind the experimenting shapes lie a solid classical education and an awareness of the essence of the sculpture. For Evison the boarders are not a limitation. They become an artistic liberation. 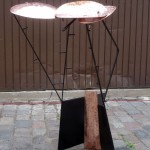 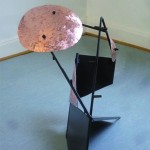 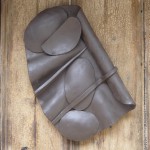 David Evison (b. 1944) is a sculptor who studied at St. Martin’s, London, in the 60’s. Though Evison’s parents were Brits, they were missionaries, so the future sculptor was born in China and has many times returned there. In recent years, even maintaining a studio in Beijing to which he commuted from his home in Berlin. Evison was taught in several places all over the world, including the UK, the US, and Australia.

Evison shows a selection of recent work: two medium-sized steel and copper sculptures from his crisp and engaging ‘M’ series, some ceramic reliefs, drawings and a 40-inch high steel and copper model for what he visualizes as a 15-foot high sculpture.

The steel and copper model, a skinny, vertical object combining stick-like forms with rounded ones, is described by Evison as an abstract inspired by the bronze bird/deer from the Marquis Yi tomb, created in the 5th century BC, and now in the Hubei museum in Wuhan.

This hybrid is an imaginary creature, a chimera believed to have special properties when it was made; today, for the same reason, it may appear to some observers as faintly ridiculous. To Evison it is “a great and beautiful work of art which I appreciate mainly for its formal values… The persons who made it were clearly trying to find the right proportions, form and profiles as well, formal values. Today we can call it a sculpture: high art to rival that of Egypt and Greece.”