The Finnish artist Kari Södö graduated from the Kankaanpää School of Art in 1996. He is working with sculptures but is also a superb graphic artist. Fantastic wooden sculptures coloured and in shapes that brings us back to our childhood. He has been exhibited in several places in Finland and has also been shown in Russia, Sweden and Denmark. 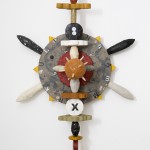 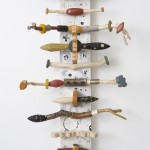 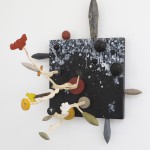 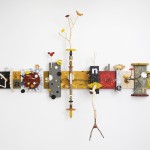 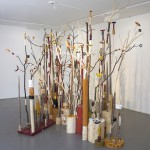 About Kari Södö ( by GHA)

Finnish artist Kari Södö does not describe his works as political. However, many of his works have been created with current debates in mind, namely the refugee crisis and the problematic relation between the EU and Russia which is also affecting Finland.

Södö says that the piece “The Encounter” (sculpture) is about meetings at many levels- between people, forms and materials. With this piece, Södö expresses the need for a dialogue in general and the joy that the encounter between people and cultures can bring – “we should share joy and not fear”.  Södö implements words in different languages onto his sculptures,  words as joy are written in both english “joy” and german “Freude”. In the bottom of the sculpture there are cubes to symbolise the urban parts of society and the wooden sticks that look like parts of trees symbolise nature, wild and growing. In the end though, everything unites into a common ground – the city with its people and nature. The sculpture incorporates many kinds of wood, and can be interpreted as a way of showing a vibrant city with diversity. In a way Södö uses the same technique for both his collages and his sculptures – containing a flexibility – and made trough adding one material to another, one form combined with another. The sculptures are like building blocks, they can be taken apart and put together again – at another spot and for a ever changing audience. The pieces do carry always an important message about dialogue brought in an optimistic way. Because of that many of Södös works are exhibited to the broader public at places such as libraries, available for everyone to see and to reflect over.

There is often a playful element to Södö’s works which did not appear until he got his first child. Before that the artwork he made was in black and white. He graduated the Kanakaanoää School of Art with an education in graphics specializing in metal. When he had graduated he lacked a space where he could use the toxic chemicals needed when working with metal ,that actually changed his focus forward to creating collages. Form has always been visible in Södö’s works, as well as rhythm. Being also a musician, Södö says that there has to be a rhythm to everything he does.