Williams’ immersive collages act as mind maps, cartographing the world in his head or visualizing “what dogs hear”. His pieces break the wall between imagined and physical spaces.

Through his mixed media works Adrian Williams’ extensively explores and searches. He draws majorly out of his imagination, the only anchor to the outside world being a philosophical question or poetic thought expressed through the title.

Williams uses a wide array of mediums to lay out his intricate imagery. Drawings in ink and pencil are accompanied by collaged elements made from stained paper, old books and found wood pieces. Woodstains and varnishes add an extra layer of colour to his narrations.

He organises sound and thought into a cartographic landscape, mapping out the unfamiliar in the form of streets, corners, stairways and odd angles. With all their details, geometric shapes and unpredictable patterns, they invite the viewer to take a step forward and look closely, scan the picture and try to orientate themselves.  Williams wedges together whole neighborhoods, allowing the attentive explorer’s eyes to trace pathways for hours. 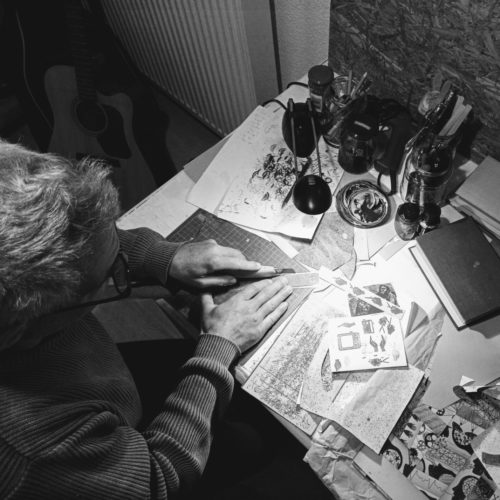 The resemblance to maps is not just formal but also applies conceptually. Williams’ images act as maps to his mind, enfolding and visualizing what is invisible to all other people. While being radically subjective in his choice of subjects and stories, Williams images allow a dialogue due to their formal clarity. They organize his thoughts, despite looking chaotic from afar. Adrian William’s works transplant a piece of the inner world into the outside, into the general public. They are portals to another dimension. Because of this mediating function, scale and surroundings of the paintings play an important role. Especially William’s larger pieces act more as windows into another world than as images that lay is placed on a wall. Putting up one of his wall filling works changes the way a room is perceived. Like the expectations when opening up a box, it’s here rather as if one wall was torn down to reveal the mysterious microcosm of thought and contemplation that always lies hidden within the physical world. The different elements form patterns and structures, making the work visually stimulating from a distance as well as up close. Utilizing mixed media and many different shapes, the artist still manages to keep a balance, formulating one final harmonious experience. 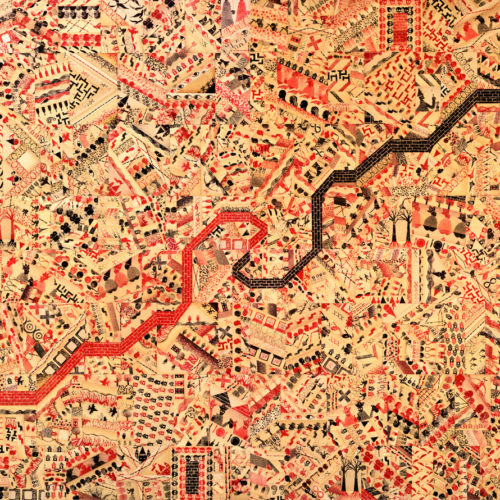 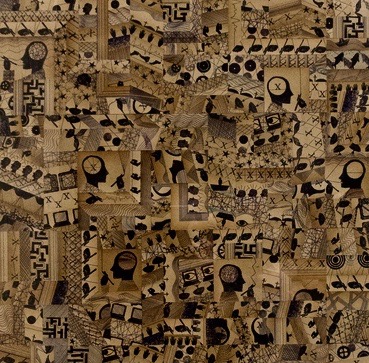