Andrea Tagliapietra’s artworks represent lonely and melancholic human beings with a striking oil on canvas and resin technique. The human body is often surrendered to his own existence.

Tagliapietra sets his dramatic scenes in an extremely simple context, dominated by strong chromatic contrasts between cold and warm colors, that immediately lead the observer’s eye to the human figure in the centre. His works represent an incisive synthesis between abstractionism and realism, as in both pictures the human body is paired to another realistic, well recognizable element: a flaming red armchair and a giant white fork. His artworks can sometimes be considered as complementary, since the same body is often pictured from different perspectives, but the face remains generally uncharacterized, symbolizing the eternal myth of the everyman. 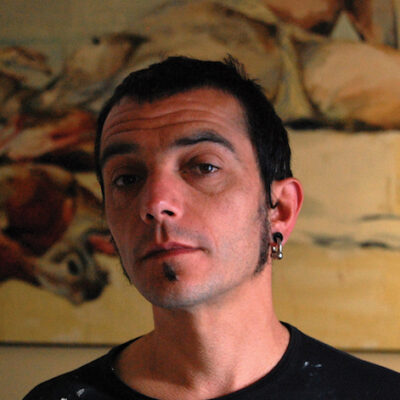 Pop accents and street art reminds are other frequent features of his paintings. In one exhibited work, the impactful yellow background immediately recalls the pop-art’s vivid tones, though it looks intentionally consumed, relating to the idea of graffiti on a public wall. Death symbols violently stand out in strong chromatic contrasts, wearing modern capitalistic symbols which contribute to identify this painting as a contemporary street-art memento mori. 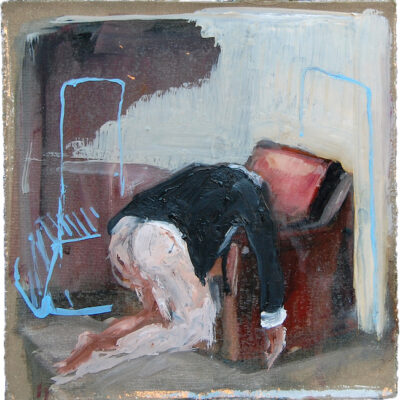 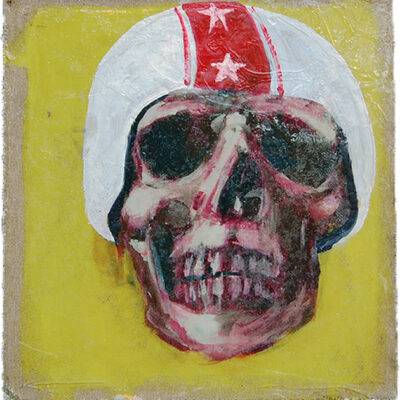