In her delicate drawings, del Cura explores in a playful and metaphorical manner the fragility and unpredictability of social relations.

Through this series of artworks Charo del Cura reflects on the daily difficulties of balancing through social norms. This is represented by metaphorical human figures in precarious equilibrium on a yarn. This is stretched between two hands to form the string figures characteristic of the game called ‘cat’s cradle’.

The viewers’ attention is caught by such strings because of their vivid colours which contrast instead with the rest of the artwork executed in black and white. The yarn is a metaphor of the uncertainty and unpredictability of social relations among which people are asked to balance themselves as a funambulist walking on a thin rope.

The attributes of the yarn are contradictory in del Cura’s artworks. In fact, the string can be read as a positive connection which joins the different elements in the artworks. On the other hand, the complicated figures created by the hands form a knotted connection which recalls the shape of a spiderweb, in which the funambulists appear trapped. 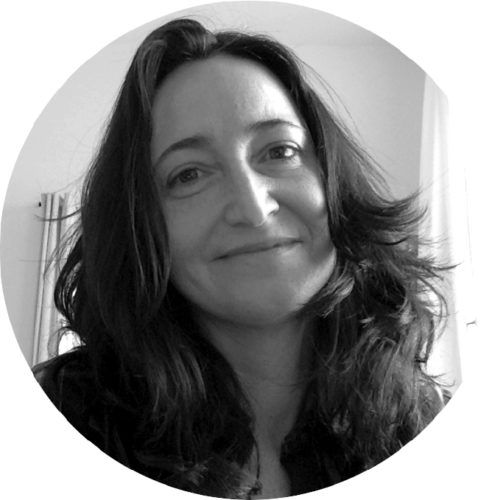 This reading contrasts with the playful appearance of the artworks, expressed by the use of contrasting colours, the lively human figures and the reference to the children’s game. However, the presence of over-scaled floating hands enhance such unsettling feelings. In fact, they appear as a superior power capable of altering the yarn upon which the human figures are precariously standing. The hands may be interpreted as a metaphorical representation of society as a whole, which looms over individuals with its norms. People, as del Cura’s funambulists, are trapped by such norms and carry on in performing their research of equilibrium in a variable setting. They won’t find any resolution as their balance is precarious and their existence is limited by the actions of the large hands which frame the scene. Beyond and around them, a white background spreads over the canvas leaving open to the imagination any possibility of an alternative to the balancing game of life. 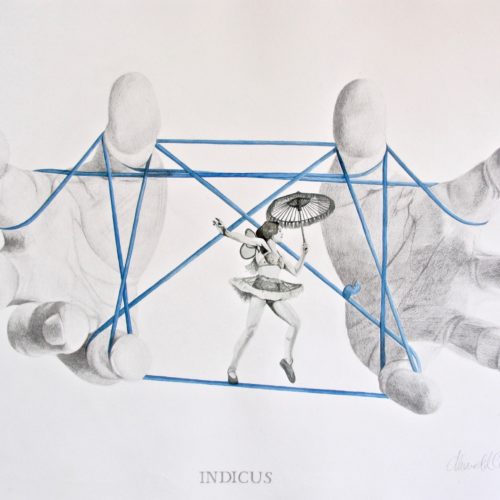 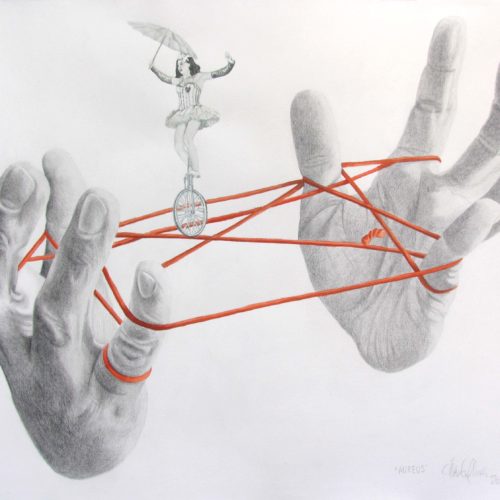