Through expressive exaggerations, trendy colours and a mix of small patterns in both decor and tattoo, Adamez’s portraits captivate pictures of a modern horror vacui.

Born in Bogota in 1986, Daniela Adamez is a Barcelona-based artist that mainly works on large-format portraits. Her colourful paintings show altered figures placed in playful decorated bright backgrounds. Through expressive deformations of the human body and stylized forms, the artist focuses on different social roles in our current society. Her portraits captivate pictures of a modern horror vacui. Creative and lively patterns take over her images – trendy colours and figurative shapes impregnate both decor and bodies in the form of interior settings, clothing and tattoo designs.

In her first artistic experiences during her childhood she was highly inspired by pre-Columbian art. Now, the stylized figures with long necks that she depicts resemble those of Mannerism, specially Modigliani’s. 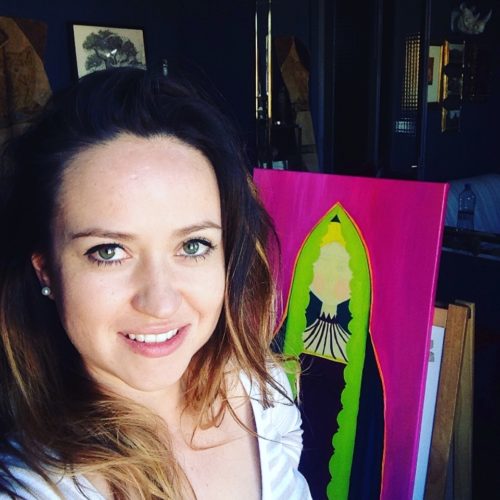 Adamez invites the viewer to know more about the depicted characters while exploring the idea of beauty and its limitations. Using acrylics and oil painting, her compositions are often placed in between reality and myth, showing characters of her generation that face current social issues – their urge for individuality gets in contradiction with their fear of being alone in a super-mediatic and connected world. The figures are shown wearing pricey fashion brands, covered with tattoos and jewelry. Young people can easily feel related to these characters. The idea of luxury has been transformed – it entered into the working and middle class imagery as a new form of identity.
See more works in our webshop archive >> 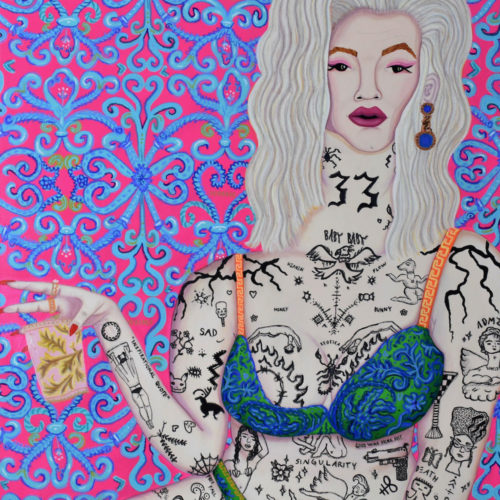