Using aesthetically appealing colours, Joana Lucas’ acrylic paintings portray peculiar characters in a highly realistic manner. The unusual elements are brought together through the composition of the works which communicates a sense of unity.

Painter Joana Lucas has the ability to bring bizarre, yet harmonious and figurative artworks to life. She primarily depicts human figures presented in absurd costumes, wearing extravagant accessories combined with objects that seem to be out of context.

Despite the unconventional presence of these elements, Lucas builds a plausible reality thanks to her highly realistic style and carefully staged, balanced compositions. Moreover, each element is accurately captured with appealing colours, thus creating a vivid reality. 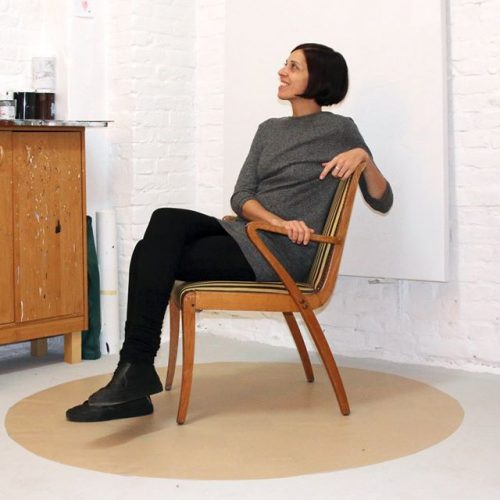 These techniques bring together elements that are typically incompatible: the different figures are connected by their balanced presence in space, communicating a feeling of unity, alliance and solidarity.

Her great attention for compositions and skill with acrylic paintings can also be observed in her urban painting series. Stripped of the human presence, these artworks remain powerful thanks to Lucas’ geometrical arrangement of elements in the space and her delicate palette selection. In her series she showcases her ability to create a trompe l’oeil, meaning the optical illusion of a three-dimensional space on a flat surface achieved by using realistic images.

Thanks to the balanced compositions – often geometrically inspired – and the appealing colours, her artworks communicate a great sense of serenity. Lucas’ evocative and cryptic titles guide the audience to inquire about the deeper symbolism of the extravagant elements and accessories present in her artworks. The viewers are invited to engage with these metaphorical realities, drawn to the gaze of the characters and guided by the use of geometrical spatial compositions. 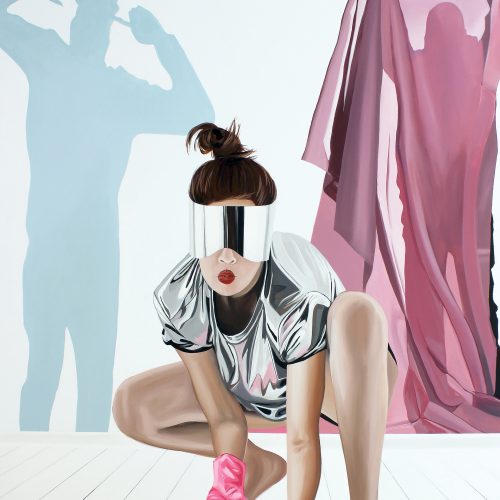 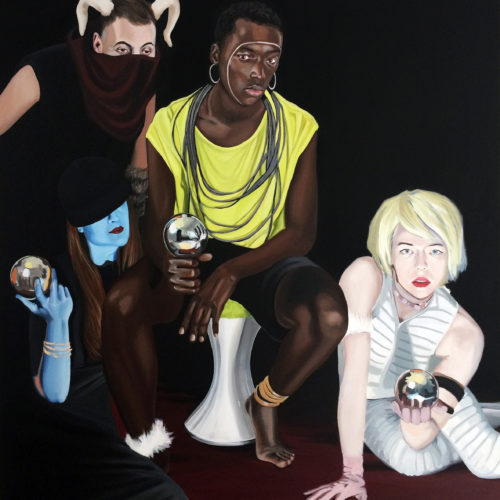