Tauber’s crowded scenes reference comics and pop-art, but contain an exciting paradox: while the colours and forms seem oddly familiar at first glance, a closer look reveals nothing but a lack of story, action or heroes.

In his ongoing series “The Fall of Duckburg” the artist fuses comic and painting on canvas. Peter Tauber manages to precisely reference the classic Mickey Mouse and Superman series without even sketching out the characters.

Although he sometimes throws in goofy ears, the infamous gloves or Minnie’s shoes, he never outlines anything completely. The iconic colours, bold strokes and motion lines are enough to instantly recognize the quote though.

Focusing more on the visual elements that underline a story than the narrative, Tauber deconstructs and recomposes the comic worlds. Remarkably this process keeps the concrete shapes and actions without actually telling a clear story.

How much can you take away from a thing without rendering it unrecognizable? Are protagonists really as important as we make them out to be? In Taubers artworks the way the story is told is more important than the story itself. While the characters are engaged in fights and missions, all the usually disregarded parts of the action take over: dustclouds, nose tips and textures. Tauber transforms and reverses the priorities that traditional comic sets. He opens up a small intersection of comic and abstract art. 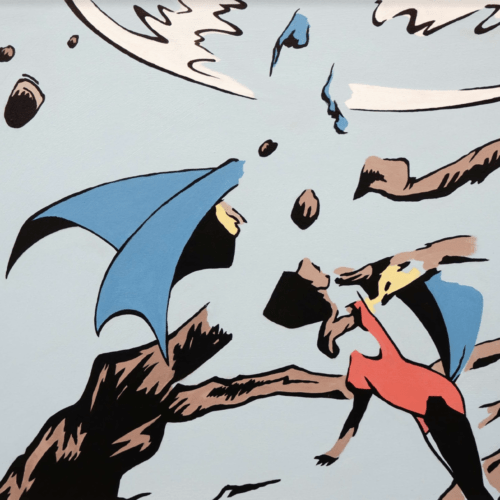