Galleri Heike Arndt DK proudly presents Border Line, featuring artists Niall Dooley (IRL) drawings, Vanessa Notley (GB) drawings and sculptures, and Eeva Honkanen (FI) drawings. These artists impress with their supreme technical skills and capture contemporary life with a great deal of humor and irony.
The works contained in Border Line create contrasts in the room in the interplay between drawings and steel sculptures. The exhibition celebrates the grotesque, the absurd and the beautiful as interpreted by the three artist’s individual expressions. Honkanen’s imaginative world captured in a large-scale ink drawing fills up an entire wall in “Constant State of Tension”. With great technical skills and clever ideas Dooley’s “Consistency” tells a story through a young man playing pool at a large billiard table. Notley’s sweet steel sculptures of a girl’s head combines words/proverbs in an unexpected way, surprising and playing with our interpretation.

Through clever observations and humor Niall Dooley (IR) draws us into his semi-surreal, colorful world. He uses metaphors to highlight interesting, relevant and provocative ideas on living in modern society. Dooley’s process starts with a sketch book, he gets inspired fro daily life, photography and usually begins with a character on the page, building the world and the situations up around them. 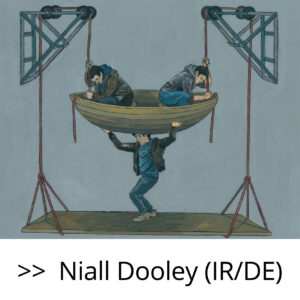 For Dooley as an artist, the foundation of his drawings is realism, used in a way to acquaint the viewer with something they can relate to. The character becomes a way of telling a broader story and represents both the individual and the collective. His masterful technical skills and style almost border to comics and illustration and there is a playfulness that helps create visual punchlines and intriguing scenarios.

Vanessa Notley (GB) has developed an artistic language that delves into the register of sculpture and drawing. She works continuously with materials that you can cut, form, even roll together. Intrigued by the clumsy innate beauty in polished steel, her artworks turn around the use of metal to soft and floating form. The border between the seductive and the clumsy, the question of power and non-power, the fragile and the imposing are part of the themes that get translated into shapes and forms in the hands of Notley. 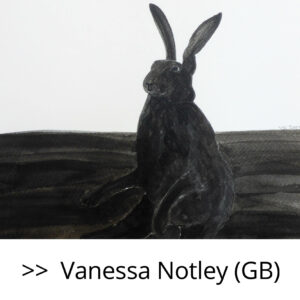 Her inspiration ranges from literature to scientific illustration, a visual expression, humoristic and biting thoughts and reflections that can create an idea and then become a sculpture in the world. Her art has a fantastic humoristic side to it. She explores the beauty in something that is a bit off tilt, a little clumsy, that seduces but at the same time is not quite right.

Eeva Honkanen formed her unique artistic expression from an early age, inspired by comic books and cartoons from her childhood. She operates in the borderland between illustration and drawing and her work of art is a fantastic inferno of figures and fantasy. With humorous play on the grotesque and the beautiful, she makes large scale drawings that impress with their incredible attention to detail. The works presented at Border Line are from a series that Honkanen based on sketches from her travels in West Africa. 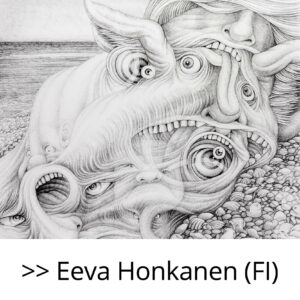 “In the drawings I’m dealing with a certain feeling of existence that I felt strongly while in travelling. For the people in Benin it seemed everything was filled with life. All objects. Alive ones as well as inanimate. Every tree and rock is filled with spirits”. There is a strong sense of confrontation in her works and the exaggerated forms and movements take us to another world where our imagination is set free.